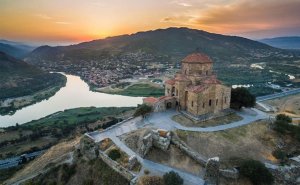 Combine a half-day sightseeing tour of the highlights of Tbilisi with a half-day visit to Mtskheta, the former Georgian capital. See all the major attractions, such as Tbilisi’s Narikala Fortress, Freedom Square and much more.
Highlights:


Even if you only have a short time in Georgia, you have to spend at least a half-day exploring Tbilisi’s Old Town. The architecture in the city’s historic district is a beautiful mixture of Georgian, Byzantine, Oriental and Neo-Classical European styles. It dates back more than 1,500 years and was founded by Vakhtang Gorgasali, King of Georgia (known as Iberia at the time) in the second half of the 5th-Century AD. The name derives from the Georgian word for warm, “T'pili.” Sliced by the River Mtkvari, which divides the city west and east, the lovely setting is ripe for exploring.

Among the sites you will visit is the Greek Orthodox Anchiskhati Basilica, the city’s oldest church. You will also see the 13th-Century Churches of Sioni and Metekhi, the magnificent Narikala Fortress, perched on a hill with superb views of the city below, and the classical Freedom Square. Continue to one of Tbilisi’s newest attractions, the Bridge of Peace, which opened in 2010 over the River Mtkvari (also known as the Kura River).

Tbilisi’s compact size means you can easily explore the nearby Synagogue, Armenian Church and Mosque, in addition to the Georgian Orthodox churches so fundamental to Georgian culture. Peaceful co-existence of the various religions helps emphasize Georgian tolerance. End your Tbilisi walking tour with a visit to the sulfur baths quarter of Abanotubani to see the most famous bath, Chreli Abano. According to legend, it was when King Vakhtang Gorgasali’s falcon companion fell that Tbilisi’s “warm” sulfur springs were discovered; helping to give it its Georgian name. Continue in the afternoon to the UNESCO World Heritage Site of Mtskheta, capital of Georgia (formerly Iberia) from the 3rd-Century BC until the 5th-Century AD.

It was the site of early Christian activity, and the place where Christianity was proclaimed as the state religion of Georgia in 319. Located about 12 miles (20 kilometers) northwest of Tbilisi at the confluence of the Rivers Mtkvari and Aragvi, Mtskheta remains the center of the Georgian Orthodox and Apostolic Church. After a drive to Mtskheta by comfortable air-conditioned coach you will explore the restored streets of the Old Town and visit the most important architectural monuments, such as the 6th-Century Jvari Monastery erected on a hill that overlooks the town. Take in the stunning views of the town and the merging of the rivers. Continue to Svetitskhoveli Cathedral, the main seat of the Catholic Patriarch of the Georgian Orthodox Church. The cathedral contains an important masterpiece of Christian church wall painting that you must peek inside to see. You will then be transferred back to Tbilisi for your hotel drop-off.

What's Not Included:
• Meals and drinks
Good to Know:
• The first part of the tour is a walking tour. Total distance covered is 1-1.5 miles (2-2.5 kilometers). 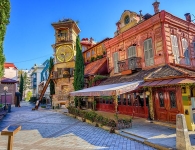 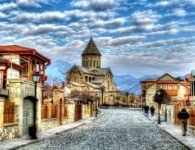 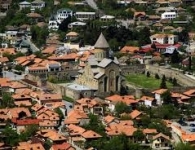 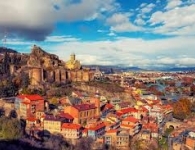 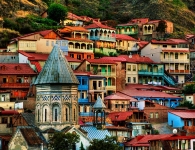 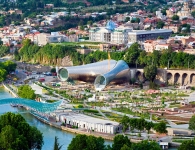