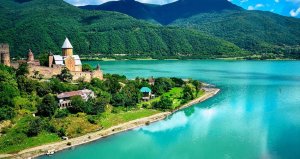 Mount Kazbegi, 5.033 m is third highest mountain in Georgia on the Great Caucasus Range. Located 160 km North East from Tbilisi. Mount Kazbek is associated in Georgian folklore with Amirani, the Georgian version of Prometheus, who was chained on the mountain in punishment for having stolen fire from the gods and having given it to mortals

On the slope of mount Kazbegi is located Gergeti Trinity Church (XIV c) at the altitude 2.175 m. This amazing small church attracts travelers for its wonderful location and amazing view on the top of mount Kazbegi and river Dariali gorge.
Highlights:
Departure from Tbilisi early in the morning, at the direction of Kazbegi.(160km) through the Georgian Military Road, it runs between Tbilisi (Georgia) and Vladikavkaz (Russia), 208 km. On the way there are very interesting places to visit.
Ananuri fortress, which is a XVI century castle complex on the Aragvi River. The Ananuri fortress stands beside the famous Georgian Military Highway overlooking a large Jinvali lake. Its high, turreted stone walls protect two churches, a watch tower and a reservoir. The main church facade is beautifully carved with animal, floral and Celtic style patterns.
Next stop on the way in Gudauri – remarkable ski resort in Georgia. Resort is located at the altitude 2200 meters above the sea level.

level and the last, top station is at 3,306 m, called summit Sadzele. The resort offers high quality skiing opportunities. The ski season lasts from December till April.
From Gudauri continue your trip to Gergeti trinity church (XII-XIV) century’s monument erected on the southern slopes of Mkinvarcveri is located at an altitude of 2170 meters. Gergeti Trinity church is an important temple and remarkable for its beautiful scenery. The Gergeti Trinity church is set poignantly on a hill directly below the towering white massif of Mount Kazbek ( 5033 meters). Built six hundred years ago its stones have weathered repeated blizzards, rain and invasion to stand as a proud symbol of Georgian resilience in the face of adversity. It is the photographer’s perfect shot.

After visiting Gergeti church we will arrive to Dariali Gorge. It is the gorge on the border between Russia and Georgia. Darial was historically important as the only available passage across the Caucasus and has been long fortified - at least since 150 BC. There is Tamari’s Fortress called Dariali castle which was built many years ago and is situated on the right side of the river Tergi. To the left of the river Tergi there is a new monastery complex on the cliff which is about 70 meters high.

What's Not Included:
• Meals and drinks 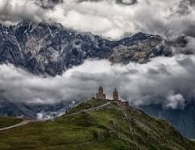 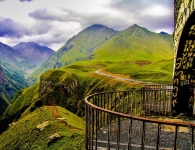 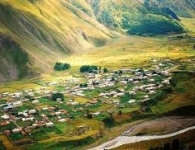 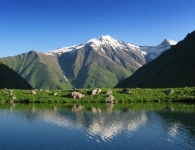