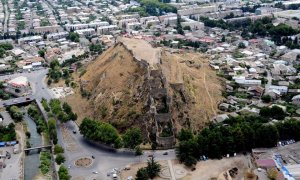 If you’re for short time in Georgia you should find a day to see one of the most interesting touristic attractions – Uplistsikhe (II c BC-X c AD) – the oldest urban settlement. Nearby from Uplistsikhe is small town Gori – the motherland of Josef Stalin. Highlights:

Uplistsikhe Uplistsikhe (II c B.C. - X c A.D.) is an ancient rock-hewn town in eastern Georgia, some 100 kilometers Western from Tbilisi. Uplistsikhe is identified by archaeologists as one of the oldest urban settlements in Georgia. The town's age and importance led medieval Georgian written tradition to ascribe its foundation to the mythical Uplos, son of Mtskhetos, and grandson of Kartlos. The central part of Upliscikhe is the largest, contains a bulk of the Uplistsikhe rock-cut structures, and is connected to the southern part via a narrow rock-cut pass and a tunnel. Narrow alleys and sometimes staircases radiate from the central "street" to the different structures. The Uplistsikhe cave complex has been on the tentative list for inclusion into the UNESCO World Heritage program since 2007.

Joseph Stalin's Museum in Gori Joseph Stalin’s Museum in Gori establishe in 1951 as a local history museum, but clearly intended to become a memorial to Stalin, who died in 1953. The main building of the complex is a large palace in Stalinist Gothic style. Enshrined within a Greco-Italianate pavilion is a small wooden hut, in which Stalin was born in 1878 and spent his first four years. The exhibition is divided into six halls in roughly chronological order, and contain many items actually or allegedly owned by Stalin, including some of his office furniture, his personal effects and gifts made to him over the years. There is also much illustration by way of documentation, photographs, paintings and newspaper articles. The display concludes with one of twelve copies of the death mask of Stalin taken shortly after his death.

To one side of the museum is Stalin's personal railway carriage. The green Pullman carriage, which is armour plated and weighs 83 tons, was used by Stalin from 1941 onwards, including his attendances at the Yalta Conference and the Tehran Conference. It was sent to the museum on being recovered from the railway yards at Rostov on Donau in 1985.

What's Not Included:
Meals and drinks.

Good to Know:
Uplistikhe is about 100 km from Tbilisi. The first part of the tour in Uplistsikhe town-museum is about 2-3 hours of walking, therefore comfortable walking shoes required. Please take your attention: due to weather condition the Uplistsikhe town-museum is open for visitors from second half of April till end of October. Please note, the tour price is sensitive to the group size more than 6 pax.

Duration: 7 hours
Pick-up and dropp-off at the hotel of your stay. 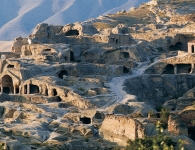 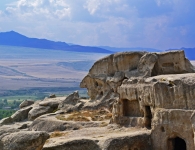 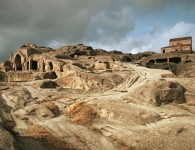 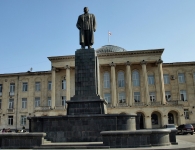 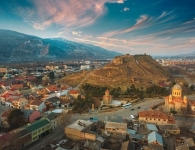